There’s a few books I come across that I keep going back to, ones that are so good that years after reading them, I’m still thinking about what the author wrote or still referencing it. I’m assembling a list of them here and I recommend all of them.

If you buy any with the links below, I’ll get a small kickback from Amazon which helps to fund this site.

The Search for Modern China

The Search for Modern China is by no means a light read, but it provides an incredibly insightful understanding of contemporary China. Spence starts with the late Ming dynasty and works his way through the formation of the Qing dynasty, China’s humiliation by Western powers in the 19th century, the chaos that reigned after the fall of the Qing in the 20th century, and finally follows the formation of the PRC and its history until Tiananmen Square in 1989.

It’s a long-ranging, detailed book, but it’s also remarkably well-written, accessible and insightful. To understand China as it is today, you need to understand its history, and Spence does a brilliant job. If you want to better understand where China is now, there’s one book you should read on China’s history, and this is it.

Buy The Search for Modern China on Amazon.

A Concise History of China

A Concise History of China is just that. Whereas Spence goes in-depth, from the end of the Ming dynasty to 1990, trying to understand what’s driving contemporary China, Roberts provides an overview of China’s long history. Well-written and easy to understand.

Buy A Concise History of China on Amazon.

Management by Peter Drucker is the Bible of business texts. Unlike most business writers, Drucker starts from a philosophical and historical perspective, and takes his subject very seriously. He considered management a liberal art, and business as our means to doing something meaningful. Profit, he wrote, wasn’t the goal, but a necessary condition. Here’s an excerpt, just to give you a feel:

While most business texts are insipid and shallow, Drucker is deep and insightful. 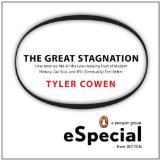 The Great Stagnation by Tyler Cowen isn’t a full-length book; rather, it’s a Kindle Single, more of an extended essay. But Cowen’s argument is just as insightful. Cowen argues that our current economic malaise isn’t a result of inequality, or lack of redistribution, or government red tape; rather, it’s because economic low-hanging fruit drove our economic success after the second world war. You can move people from the farm and into the classroom, and reap the benefits of productivity, only once. It’s a fascinating read and provides an excellent framework for understanding our economy and how to continue growing again.

Buy The Great Stagnation on Amazon.

Cocoa Programming for Mac OS X is the finest way to start learning how to build applications for the Mac or iOS devices. Hillegass’s writing is clear, and while it is designed for people that are completely new to OS X development, the book provides a lot of material to learn.

If you want to learn how to build applications for the Mac or iOS devices, this should be the first book on your list.