When I released Basil a year ago, I had no idea what to expect. Not only was it my first iOS application (or application altogether), but it was the first real thing I’d conceived, designed and built for people to use.

The last year has been incredible. Not only has Basil sold fairly well on the App Store, but it’s been useful to a lot of people, and something they’ve loved to use. It’s incredibly gratifying that Basil is helping people to store their own recipes, find new ones, and cook them. Since it was released, though, there’s been one request people have made that’s dwarfed all others in terms of quantity: photos. Surprisingly, people want to save photos along with their recipes. (Okay, well. It’s not so surprising.)

Today I am releasing Basil 1.5. You can go get it on the App Store, check out the new website, or keep reading for the details. 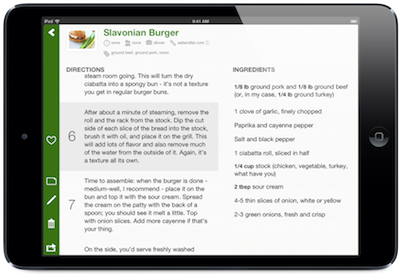 Being able to see what the recipe looks like makes browsing your recipes more engaging and makes Basil much more useful, because you have a much better idea what the finished meal will end up like. It’s sometimes difficult to picture it in your head from a recipe’s description and if you haven’t looked at a recipe in a while, it’s easy to forget, too. When I was thinking of how to build in photos, I wanted to do it in such a way that it added all of that, but also so it didn’t detract from what’s special about Basil, which is its focus on making sure there’s nothing in the way of you and the recipe while cooking. I think that’s exactly how it ended up; it took what’s good about Basil and made it better. I think you’ll agree.

Photos is the big new feature, but there are three more large additions to Basil as well. The first is the ability to import and export your recipes to Dropbox.

When you’ve taken the time to enter in all of your favorite personal recipes, and to collect recipes from the web as well, keeping them safe is even more important than finding new favorites. Recipes aren’t quite as important as family photos, but they’re definitely important, and very personal to people. Some have been handed down from parents and grandparents, others created by you, and many are a part of past memories or memories yet to make—special dinners for special people in your life, parties, family events.

That’s why Basil can now export its recipe library to Dropbox and import it as well. Now, you can periodically export your library to Dropbox and never have to worry that you’ll lose your recipes. Basil always backed up its recipes when you backed up your iPad to iTunes or iCloud, but this will make it much easier to restore your library or to transfer your recipes to another iPad.

Unlike a typical backup/restore feature, importing will not replace your current recipe library; instead, it will add recipes that aren’t currently there. That way, if you delete a recipe that you’d like to bring back, importing from an older export file that includes that recipe won’t wipe out the recipes you’ve added since—it’ll just add back the one you deleted.

This isn’t the most exciting feature in the world. But I think it’s going to prove useful to a lot of people—make their recipes more secure, make it easier when setting up a new iPad or giving recipes to a spouse—and I think that’s pretty great.

Here’s another feature many people have asked for and I think is really useful: you can now add notes to each recipe. I’ve found this really useful for making smoked brisket in particular, because I usually adjust something each time (the rub, what kind of wood I used, whether I mopped it while it was in the smoker, et cetera). You can use it to note any changes to the recipe or method you made (“I used half the salt,” “sauté the onions for 5 minutes longer”), or even specific instructions for how certain people like it made. Whatever you want to remember for next time. It’s a very simple feature, but also quite useful.

This is my favorite new feature even though it’s the simplest. (Maybe that has something to do with it, actually.) Now, while cooking, you can “cross off” ingredients you’ve already used by tapping them. Basil will turn them gray and put a line through them, so when you look at the ingredients list for the next step, your eyes will be drawn to the remaining ingredients—no need to scan a long list of ingredients. It’s ridiculously simple, but it’s also ridiculously useful while cooking.

I am incredibly excited for you all to finally be able to use this version of Basil. I’ve been using it for the past couple of months, and there’s no doubt that it’s a superior application. Better looking, more flexible, more powerful, and makes cooking easier.

One last note: I love adding features like cross off, notes and automatic unit conversion. My goal is to add new capabilities to Basil that make cooking an easier process but don’t at all distract from cooking itself. They should be purely additive: if you use them, they help out, but if you’re not use them (or don’t want to use them), they aren’t in the way. Hopefully I’ve achieved that, and I am working away on some new ideas there, too.

Go get the update! And if you don’t already own it, go get it on the App Store!