Writing and reading weblogs should not be a lonely affair.

Over the past year, I have seen a number of Fever readers in my subscriber data, and sometimes a “site.com/fever” entry would appear in my Mint referrers list. For many of these referrers, I did not know they even read my weblog.

Weblog writing tends to be very solitary, and in some ways that is positive. I cannot imagine writing without quiet — a quiet which helps clear my mind and lets my thoughts rise to the surface.

Fever shows me who is reading my articles. Because Fever is a web application which must be installed on the user’s own domain, each Fever reader is unique and identifiable, unlike the Google Reader masses. Rather than just an anonymous digit in my Feedburner data, each reader now has a name, an about page, and likely their own content that they publish on their domain.

Even more important is it builds a community. I can find more people to read — individuals that, unless they send me an email or someone I currently subscribe to links to them, I may never have found. Publishing becomes much more a two-way than one-way affair.

This would all be academic unless a large portion of my subscribers use Fever. Luckily, they do. Here is the breakdown of what feed readers my readers used over the past seven days: 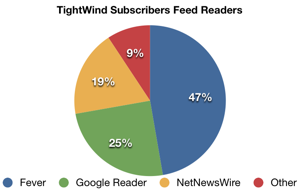 Nearly half of my readers use Fever. This not only shows how integral Fever is to me to see who is reading TightWind, but it also shows that readers must love using it since it has become my readers’ favorite feed reader in less than a month.

I use NetNewsWire daily, because I want to read everything that a few writers publish or link to. Their content and links are consistently good, and I do not want to miss a single thing they publish.

NetNewsWire is perfect for this, because each feed is treated like email — there is an inbox, and each item is either read or unread. This means that, unless I happen to be particularly lazy that day, I will at least read the headline of every item, and likely more than just the headline.

Unfortunately, most feeds are not this consistent. For every one article or link they publish that I really love, there may be five that do not interest me at all. I still want to read their good content, though, so this presents me with a tough choice: do not subscribe to these kinds of feeds and enjoy using NetNewsWire but miss their occasional good content, or subscribe to them and suffer through an inbox filled with uninteresting items. I tend to pick the latter option, because I do not want to miss their good posts.

Because NetNewsWire does not distinguish between these two kinds of feeds, my inbox becomes overrun with items I am not interested in. So I skim more than I read, and feed reading becomes more of a chore than the joy it should be.

Fever, though, does distinguish between these feeds: the consistently-good feeds are called “Kindling,” and the hit-or-miss ones “Sparks.” By separating them, I can read just the consistent feeds all at once, and go through the “Sparks” when I have the time and motivation.

Of course, you can approximate this in NetNewsWire using folders. But Shaun Inman recognized that weblogs are not like email (or newspapers), published in a vacuum. Whereas NetNewsWire treats each feed as separate and unrelated to others, Fever recognizes that weblogs link to other content, and that if a number of people are linking to something, then it is likely to be worth reading.

Using this idea, Fever sees what people are linking to, and thus what is important and popular over whatever time period you specify. And because it is powered by the feeds you subscribe to, “what is important” is defined by you. The genius of separating “Kindling” and “Sparks” is it means that you can subscribe to as many feeds as you want without it becoming cumbersome and messy. Indeed, it just becomes more powerful as you subscribe to more feeds, because Fever receives more and more data to look through.

More interestingly, though, it reveals communities which may not be immediately obvious. By seeing what people are linking to, you are also seeing what they are reading. But by using Fever, you are also seeing each link in the context of links made to the same content by others, rather than seeing it on its own. It is that context which is important. Since communities are nothing more than people interested in the same things, and Fever shows precisely this, it means what you are seeing is the underlying structure of a community. The structure was always there to see, but because past feed readers conceptualize feeds as individual and distinct, existing in their own world, rather than as connected — the full community structure was difficult to see.

This is something monumentally powerful that is just in its infancy. I can imagine an application which finds the community structure from what publishers link to, who readers subscribe to, and what they read, and utilizing this data, creates a visual look at how people are connected on the web. Using this, you could not only identify communities, but identify community leaders and individuals rising to become leaders.

Or, using this data plus information like how long people viewed an article (and thus an idea of how interesting they found it), an application could recommend new feeds and articles for people to read. It would be quite accurate, too, because it knows 1. what the user is interested in from what they subscribe to and their reading habits, and 2. what other members of the same community are reading and enjoying at that moment.

In effect, this can allow substantive communities to exist without the need for a central meeting place. Yahoo! Groups, forums, and even Twitter would not be necessary on their own. Provided each publishing platform people use (WordPress, Tumblr, Typepad, Movable Type, even Twitter) utilizes the same RSS feed standard, each individual platform choice would be largely irrelevant. This extends the concept of web communities much farther than we have seen, because it requires so little infrastructure to power it. To join a community today, it requires finding where some number of like-minded people are congregating. That takes time, and if that forum or web application goes offline, the community goes, too. The publishing platform becomes much less important than the publisher and their content.

Moreover, the communities would be much more organic and evolve more quickly, because the “community” is just a reflection of who is reading and linking to whom. In today’s conception, a “community” is more tied to its physical structure than its substantive structure. We think of communities as being in certain regions, or on certain web sites. A community, though, is the connections between people, not the means through which they connect. An application which shows these connections across the entirety of the Internet, rather than on a certain web site or in a certain geographical area, would both more accurately represent a community, and allow a more vibrant one to exist.

Fever does not fully realize this possibility, but it is certainly a long stride toward it. Because Fever is tied to a user’s unique domain, and thus to their own identity, writers can see precisely who is reading their writing, and readers can look at the community their writing happens in. I believe this is the future of the web — revealing connections between data and people where we did not know they existed. These are connections which can be used to discover new things about our world, and to become more effective in how we read, work, and socialize.

The power of the Internet is not how fast we can download data, but how effectively it connects people. The concept Fever embodies helps us realize the incredible potential of individual weblogs and feeds.