What iWork.com Doesn’t Do, and What that Means

Today, Apple announced iWork.com, a web application which allows online collaboration on iWork documents. The user-interface is in line with MobileMe’s, which is to say, it is simple and intuitive. Its feature-set is minimal — there is a document thumbnail browser on the left, the document is in the center and note controls in the top-center, and a column on the right which lists who has viewed the documents and comments. 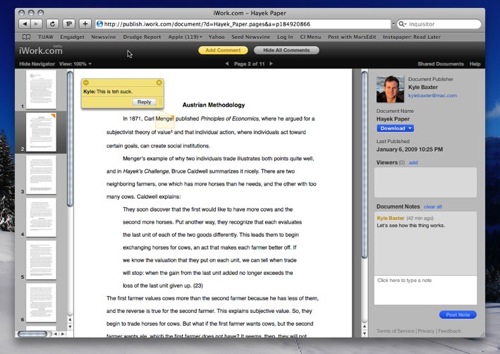 iWork.com’s focus is simplicity. Documents can be shared from any iWork application by clicking the “iWork.com” button in the toolbar, and the service is fast. I uploaded an eleven page Pages document and 11.5 MB Keynote presentation, and both loaded almost instantaneously in the browser. Even better, iWork.com is quick — even switching between slides in the Keynote presentation was stutter-free. For a “beta” web application, it is quick. It works, and it works well.

What it Doesn’t Do

Many applications, both web and desktop, suffer from the same problem: their central intent is unclear, hidden under a mess of features that were thrown in because it is easier to build in features than to decide what does and doesn’t belong.

iWork.com doesn’t have this problem. Its intent is immediately obvious as soon as it opens: iWork.com is a document viewer, as opposed to an editor. When Apple says this is online document collaboration, they mean it in a way quite different than others do, and I think this reveals Apple’s thinking on the relation between web and desktop applications.

In the iWork.com model, users create documents on the desktop, and share them on the web. Discussion — through notes and comments — happens on the web, and editing is done on the desktop.

A Short Note on Payments

I was a bit surprised that iWork.com is not included with the MobileMe subscription, but after consideration, this makes sense considering the lengths Apple is going to make sure its product offerings are distinct and their intent clear. MobileMe is just that — it makes all of your personal data mobile. iWork.com’s intent doesn’t fit under MobileMe. It is a separate service that is designed for online document collaboration. MobileMe is not .Mac, an extension of the Mac to the web, and including iWork.com in MobileMe would confuse MobileMe’s intent and branding.

Just a few years ago, Apple’s revenue sources were quite simple: they sold Macs and iPods, and sold music. That was it. Hardware and music sales, with Mac and iPod sales being the most important element.

No longer, though; Apple now also receives significant revenue from iPhone application sales, is emphasizing MobileMe by making it integral to the iPhone experience, and is attempting to build smaller revenue streams from iWork.com (and, I would assume, more web applications yet to be released) and artist lessons. It is interesting to see Apple building diverse and solid revenue sources to sustain itself in the future as it continues its transition from a computer company to an experiences company, Apple Computer Inc. to Apple Inc.