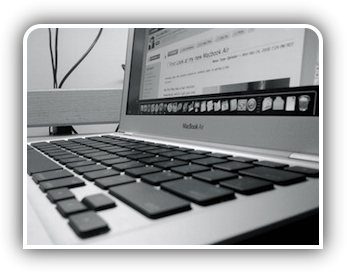 I bought my Macbook Air in late March 2008, and wrote a mostly glowing review of it.

But things, as they say, change. I wrote that review over a month ago, so it is time to revisit the Macbook Air and decide what I really love, and what I don’t. Think of this as a sort of performance evaluation that doesn’t, you know, suck.

The wowness of something new usually fades within a few weeks. It does not take long for the incredible to become the mundane.

Any new PC tends to follow that pattern. Initially, the user is excited: they just bought new computer, and it feels faster and… new. But soon, the user realizes that their PC is not much different than their last one, except for its “speed,” which also fades as new processors are released and, inevitably, Windows grinds excruciatingly to a slow stop under its own weight.

With that little lead in, you’d think I was about to tell you I’m bored with the Macbook Air’s form factor. Why the hell else would I repeat clichés?

For dramatic effect, of course.

A friend played with the Macbook Air for the first time a few weeks ago.

When I pulled it out of my bag, she let out a small little gasp. She said, “That’s the first notebook worth being called a ‘notebook.’”

I paused. “Exactly!” I quite literally couldn’t have put it better myself.

The Macbook Air’s thinness is still incredible. Every time I pull it out of my bag, it amazes me a little that such a great computer can fit in something so small.

When I pulled it out of my bag, she let out a small little gasp. She said, “That’s the first notebook worth being called a ‘notebook.’”

Its size, though, isn’t something just to look at, without any real value. Quite the opposite, actually. The Macbook Air’s thin case and sleek design are minimalist in a way no other computer is. The Macbook Air gets out of the way, and let’s me do whatever it is I am trying to do. When I am lying in bed and have it on my lap, I don’t have a constant reminder that it’s there in the form of weight, as I did my Powerbook. I don’t have an obtrusive webcam bulging out of the bezel. I don’t have ugly stickers across the wrist rest.

Instead, I have a notebook on my lap. A notebook computer with a beautiful screen, an excellent keyboard, and nothing else.

The Macbook Air, and other Macs, should be recognized for their minimalism. Of course, the Macbook Air’s flip-down port panel is a great example. When you don’t need it, it does not exist. When you do, it flips down solidly. It works perfectly when you need it, and does not get in the way when you do not need it.

My two favorite examples, though, are small and ostensibly inconsequential. The sleep light on the Macbook Air is almost invisible when not on. Without putting it up to my eyes, I can’t see it. Even then, it is just a faint line along the front.

The second is the green iSight indicator LED in the top bezel. Unless it is on, I can’t see it. Little details like this may seem irrelevant, but these little bits add up to a beautiful whole. Apple really thought through the Macbook Air as a concept: it’s the computer that gets out of the way and let’s you work. It lessens the abstraction between you and your work, much like the iPhone has.

Packaging seems like a rather useless thing to write about. For most companies, it is, because packaging is a mere afterthought. For them, the box only has to keep the product itself marginally safe from shipping. 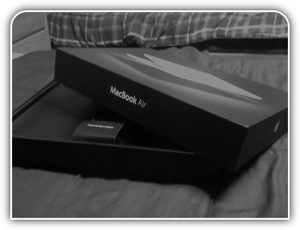 That’s where they get it wrong: packaging is a part of the product. When I spend $1900 on a computer, I am not just expecting a decent computer. I expect an experience. I want elegance from the second I buy it to the last accessory I pull out of the box.

Apple knows what they’re doing here. The Macbook Air box is made of a thick, heavy cardboard that feels heavier than the Macbook Air itself. The boxing material feels just like the iPhone’s.

The box is thin and small, which only compounds how dense it feels. It feels like you are holding something very substantive — the box feels solid, not like cardboard at all.

What I love most about its packaging is it isn’t a typical box with a flap on the top that you open to remove the contents — there are two separate pieces, and the top piece fits very tightly. When you remove the top piece, its underside — which touches the computer — is lined with a black foam-like material that feels a bit like felt.

That says nothing of how the Macbook Air and its accessories are stored in the box. I think you are all familiar with how nicely Apple does it. It is dangerous here, though, to think this is all obvious. Of course products should come in great packaging. It’s obvious, just like the iPhone made already existing functionality easy to use, so Apple deserves no credit.

It sounds so simple and obvious. But often, getting to that level of simplicity requires enormous iteration in design. You have to spend considerable energy understanding the problems that exist and the issues people have — even when they find it difficult to articulate those issues and problems themselves.

Which is why I am writing about a freaking box, and is why I love Apple. They want to get to that point where, for the end user, there is no question of why they designed something the way they did, or how it should work — it just works the right way.

A company which invests that much thought and time into something as seemingly small as a box deserves my money and enthusiasm. It means they actually give a shit about the products they are creating and selling and that, in a commoditized world, is remarkable.

When I bought the Macbook Air, I basically said, I don’t need Firewire 400 and 800, an ethernet port, or a disc drive. I don’t need a spacious hard drive, or a 2.4GHz processor. I don’t need a decent graphic processor. The gains I make in mobility outweigh the loss of those things.

I think this statement is still basically true. I am primarily a student, and increasingly a web designer and writer. Thus, I don’t need a great GPU. What I need is: a great screen, a great keyboard, a decently fast processor, and a very mobile computer.

The Macbook Air continues to fulfill those functions brilliantly. I was worried that its slow hard drive would bug the hell out of me, as I was used to the 7,200 RPM drive in my Powerbook. Luckily, though, this hasn’t been an issue in daily use. I only notice it when booting up or transferring something to disk, and it really isn’t worth complaining over.

I haven’t missed the multitude ports my Powerbook had. Not once. While I would love to have Firewire 400 to backup my hard drive with, this just hasn’t been an issue.

The disc drive has been much the same. I bought the external Superdrive because I still like buying physical CDs every once in a while, but I haven’t used it more than a few times. When away from my desk, I haven’t needed or desired to use it at all. For how I use my computer, it makes more sense having an external than internal one, and I suspect it does for most people, too.

Like all Tuesdays and Thursdays, this morning I woke up at seven in the morning and checked my email, ate breakfast, and headed to my 8 AM class. (Okay, I lied; I didn’t do that this morning. I woke up at exactly 8 AM, yelled oh, shit, and ran to class. But this what I generally do every Tuesday and Thursday.) I have class from 8-11 AM, and during that time, I switch between taking notes like a good student, and reading weblogs like a geeky-bad student. With my Powerbook, I had to drop screen brightness to the lowest level and turn off WiFi for one class (hour and twenty minutes) to get the battery to last for all three hours.

With the MBA, I grab it and walk to class, no backpack. It is easier to take the MBA to class than a notebook; it is light and actually thinner than most notebooks. While in class, I leave WiFi on for the entire three hours, and usually still have two hours left on the battery when I’m finished. (Or so it claims: the point is, there is a substantive amount of life left when class is done.)

When I need to go to the library with a few books, the MBA saves weight in my bag. Yes, I could, and did, carry the extra two and a half pounds the Powerbook entailed, but a lighter bag makes for a happier me when walking to the library. Accounting and Chinese history books are heavy enough — I’ll take the weight savings wherever I can get them.

After class, and when I am not working on school work, I am using Coda to work on several projects I have going on. Coda is not a taxing app, but its animation (like when you click on one of your websites and the icon simultaneously flips around and grows in size to fit the screen) either wasn’t fluid on my Powerbook, or didn’t work at all. Coda is smooth on the Macbook Pro, and I love that. I have a faster computer that is between a quarter and three quarters inches thinner, and two-and-a-half pounds lighter, than my Powerbook.

I think it is safe to say I love the Macbook Air today as much as I did when I bought it. I do not like the small hard drive size (I only have fifteen gigabytes left, and I’d like to add a few more applications), but the compromises made have been more than worth it for what I got: a faster, thinner, and lighter computer. A true notebook computer.

I am especially willing to accept those compromises when I get Apple’s attention to detail. That is something that other companies simply don’t have — and a big reason why I won’t be buying anything other than a Mac for a while.

What I do want, however, is a nice 24″ monitor. Doing web design on the Macbook Air’s screen is not a bad experience, but it would be much better one on a bigger and higher resolution screen. I want the screen real estate to have several apps open at a time, and it isn’t possible on the Air. Thank God for Exposé and Spaces. That will probably be my next purchase, whenever I recover from this investment.

Simply put: if you love Macs, don’t do anything too graphic-intensive, and need a highly mobile computer, the Macbook Air will almost-assuredly satisfy you. Don’t let its lack of ports and disc drive deter you. Think about how much you use those extra ports and drive, and weigh that against the Air’s benefits. In this case, I think the Air wins.